The BIG BANG THEORY in Cosmology: Science, Metaphysics, the Universe and Your Life. 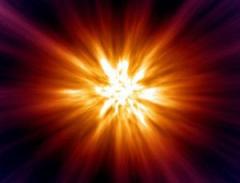 The Big Bang Theory is a theory within the branch of space science - called cosmology - that attempts to explain the physical origins of the Universe and everything within it, including us.

Further down on this page you will find links to articles and a few videos that can help you gain insight into the details of cosmology and the Big Bang Theory.

But what are the metaphysical aspects of this theory, and how might you use it in your everyday life?

As physical science continues to explore the nature of our universe at both the largest and smallest scales, the evidence continues to grow that what we perceive to be a material universe is in fact not physical.

On the quantum level (the smallest level of particles and waves) scientists have found - through observation, hypothesis, and mathematics - that what we perceive as "matter" may in fact be made up of something "less than nothing".

In cosmology (the largest level of stars, galaxies, and the universe) the same quality of physical matter seems to be true. If the Big Bang Theory is correct, then the Universe emerged from "something" - a quantum singularity - that also might be "less than nothing".

How might this apply to your everyday physical life experience?

For some, this information is enough to justify belief in God, creationism, or a supernatural source (ie. the "something" that is "less than nothing") that caused the beginning of the Universe and life within it. It can and has been used to justify religious belief.

For more about the nature of knowledge and belief, check out "Epistemology" in the PHILOSOPHY section of Metaphysics-for-Life.com.

On another level, understanding the role of Mind and consciousness and how these affect our perception of the physical Universe, could give us some understanding into the true nature of our physical life experience and who we really are within it.

Quantum physics has shown that what we perceive as physical matter exists as waves of infinite possibilities or probabilities, collapsing into one single option when the Mind observes it.

Quantum science has also shown that one thing (in this case the Mind) can exist simultaneously in any number of points in space and time. This backs up the spiritual and philosophical claims that every human being is in fact One Mind appearing in many - perhaps billions - of places at once. This idea also supports the theory that the Universe is the manifestation of thought in one Universal Mind, with each of us occupying a unique point of view within it.

The Big Bang Theory also supports evidence of "entanglement" in quantum physics - the observation that two particles that were once joined, and then separated in space, continue to react to stimuli as if they are still joined.  If all matter was once "joined" in the quantum singularity that preceded the Big Bang, then all matter in the Universe is "entangled".

Some believe that entanglement, the existence of quantum singularities, the Universal Mind, and other elements of Cosmology and the Big Bang theory can explain experiences such as remote viewing and influencing, "spiritual" healing, quantum jumping, psychic awareness, and much more.

Scientific theories and the evidence that supports them helps us grasp the true nature of our reality. This gives us justification for pursuing the study of metaphysics and its practical applications.

To learn more about the Big Bang Theory, cosmology, and the true nature of time, space, energy, and matter, please explore the links and watch the videos below...

Links to more pages about Cosmology on Metaphysics-for-Life.com.

~~ Mayan Cosmology - The Mayan Calendar: A Metaphysical Viewpoint.
The Mayan civilization had a gift for perceiving cycles of time. These cycles were associated with the movements of Earth, Sun, and Moon through space and time. On December 21, 2012 the Sun will eclipse the center of the Milky Way Galaxy. It is also the winter Solstice, which places the Earth between the Moon and the Sun. This alignment only happens once every 26 thousand years.

~~ 2012 - End Times? Or just another movie?
Who knows. Perhaps on December 21, 2012 we will encounter events that have not been seen or experienced in nearly 26,000 years. Or not. We do know we are witnessing the end of a very long cycle, and the beginning of the next, very long cycle. What that transition will bring we cannot know - at least not until we "go through it" - and therefore "know it" - ourselves.

~~ The Theory of Everything: Uniting The Physical and Non-Physical Dimensions of Experience
Both science and spiritualism have come to the realization that what we perceive as physical matter arises from, and is in fact, non-physical. Therefore, to seek a TOE in terms of three dimensional matter and energy is not only frustrating, but impossible. Modern scientists who are willing and able to integrate both physical and non-physical aspects of reality into their theories are beginning to meet with some success

The-Big-Bang-Theory.com at All About Science

There are many misconceptions surrounding the Big Bang theory. For example, we tend to imagine a giant explosion. Experts however say that there was no explosion; there was (and continues to be) an expansion. Rather than imagining a balloon popping and releasing its contents, imagine a balloon expanding: an infinitesimally small balloon expanding to the size of our current universe.

Wikipedia: About the cosmological model of the Universe
From Wikipedia, the free encyclopedia. According to the Big Bang model, the universe expanded from an extremely dense and hot state and continues to expand today. A common analogy explains that space itself is expanding, carrying galaxies with it, like raisins in a rising loaf of bread. The Hubble Ultra Deep Field showcases galaxies from an ancient era when the universe was younger, denser, and warmer according to the Big Bang theory.

Cosmology: New Scientist Magazine
Cosmologists study the universe as a whole: its birth, growth, shape, size and eventual fate. Get started with our beginner's guide.

On Truth and Reality: Cosmology - The Big Bang Theory
Top Ten problems of the Big Bang Theory, and how they are easily solved by the most simple explanation of physical matter - the Wave Structure of Matter...

Watch more videos about cosmology at: A Mind With Heart Channel on Youtube. The official Youtube channel of Metaphysics for Life!

Back to the TOP of BIG BANG Theory,  Return to HOME page.