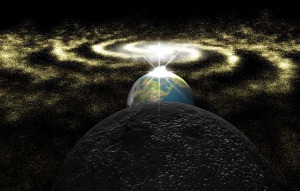 December 21, 2012 marks the winter solstice (in the Northern Hemisphere) as well as the "end date" of the Mayan Long Count calendar.

To put this rather large scale of time and space into human perspective, imagine that you are a microbe with a life span equivalent to a human life span of 70 years condensed into a single day.

Today is the Winter Solstice - the "end date" of the Year Long calendar - a monumental moment when time and space shift. The days, which have been getting shorter will begin to lengthen, and the nights which have become very long will begin to shorten.

It's the long awaited "Return of the Light" predicted by the Mayan microbes with their Long Count calendar thousands of "years" ago - or in human time a few thousand hours ago ( a little over one month ).

From your perspective as a microbe, the impact of this event is almost imperceptible. The long, warm, bright days of summer, spring and autumn are impossible to imagine. And yet, in just a few months ( ie. 12,000 years ) your descendants will be wallowing in an abundance of sunshine, water and warmth. Heaven on Earth.

But for you, the next 35 "years" (12 hours) will be pretty much the same. A kind of mirror image of the first 35 "years", but it will be very difficult for you to discern the difference from your microbe perspective.

Of course, there are significant differences between a winter solstice and a galactic alignment. One measures relative length of day and night, as well as distance of our planet from the sun. Galactic alignment creates changes in gravitational and magnetic fields, with impacts upon life and our planet that are still being measured and are under investigation.

But from our human perspective, the scale of the Long Count calendar and the cycle of time and space it represents are similar to one calendar Earth year experienced by a microbe that only lives for one Earth day.

About 26,000 years ago the Earth and Sun moved into alignment with the Galactic Center of the Milky Way Galaxy, encountering the gravitational and magnetic fields of the Galactic Plane.

How this alignment affected life on Earth is not available because we have no historic records reaching back that far. For the next 13,000 years our solar system moved away from this Galactic Alignment. The cycle continued, and for the past 13,000 years our planet has been moving once again towards alignment with the Galactic Center and is encountering once again the gravitational and magnetic forces of the Galactic Plane.

This is a long, slow process, and while it no doubt has effects upon life on our planet - it is still a very looooong, slooooow, process.

For thousands of years, humans have been celebrating the Winter Solstice - the return of the light, sun, warmth, and life to the Northern Hemisphere of our planet. Even though we know that December 22nd will be just as cold and dark (if not colder) than the 21st, we also know from experience that the days will get longer and warmer, and life will return to the land.

We don't have the historic records to fully understand the impact of the Long Count cycle on life and our planet.

All we know for sure is that it happens. Every 26,000 years the Earth moves into alignment with the big black hole in the center of our Milky Way. We have been moving into this alignment, gradually, for a very long time. The likelihood of sudden, perceptible shifts are about as likely as a sudden shift happening at midnight on the solstice. It just doesn't happen that way.

If you were a microbe, born at noon on December 21st and you knew the Winter Solstice would occur in your lifetime - marking the end of a very long cycle, the end of a "year" or even the "end of time" - then you might write books about it, make movies about what might happen, and speculate about a great spiritual awakening of microbekind.

Who knows. Perhaps on December 21, 2012 we will encounter events that have not been seen or experienced in nearly 26,000 years. Or not. We do know we are witnessing the end of a very long cycle, and the beginning of the next, very long cycle. What that transition will bring we cannot know - at least not until we "go through it" - and therefore "know it" - ourselves.

The Mayan Calendar and 2012: A Metaphysical Viewpoint.
Although it is possible to "see" future possibilities through the processes of remote viewing, psychic awareness, and even quantum jumping (all of which are variations of the same thing - ie. moving conscious awareness through time), the only way to "know" what will happen in 2012 is to live through it - or "go through" it.

Academy of Remote Viewing And Remote Influencing
Remote Viewers attempting to see what will happen on December 21, 2012 report that they encounter a "bump" in space and time, creating an experience for the viewer of all possibilities existing simultaneously. To learn more about remote viewing and remote influencing, and how it can help you create and choose your own probable future, visit this page and listen to the interview with Gerald O'Donnell.

BEYOND 2012: EBTV interviews Dr Carl Calleman, leading researcher and authority on the Mayan Calendar and its relation to evolution of consciousness on Earth.

Watch more videos at A Mind With Heart Channel on Youtube. The official Youtube channel of Metaphysics For Life!